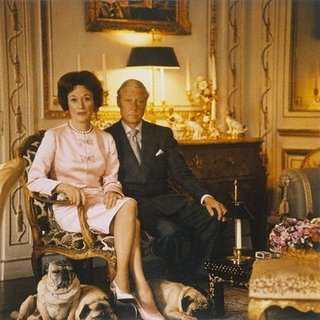 I feel so empty inside: The Duke and Duchess of Windsor

And so the great feud began. Mamie's wedding to Junius Overbeck was the social event of the year. Almighty was invited but refused to go. No, she had a better idea. A lovely, wicked idea.

Almighty threw a party of her own the same day as Mamie's wedding. But this was no ordinary party. It was an irresistible invitation. A reception at Gilded Elms with none other than the Duke and Duchess of Windsor. You know, Edward, Prince William's great-great uncle? The guy abdicated the British throne so he could marry his true love? Who just happened to be a Baltimore girl, Wallis Warfield Simpson, and an old girlfriend of Almighty's father. Wallis hadn't been to town in ages, so her return was a huge deal. Almighty begged her father to arrange the visit, and he couldn't resist spoiling his precious princess Lou. With a snap of his fingers it was done.

Poor Mamie's wedding was ruined. No one wanted to go to an ordinary old wedding when they could meet British royalty. Even Mamie's own parents ducked out early for a chance to see Wallis and the former Prince of Wales close-up.

Mamie pretended it didn't bother her. She and Junius went on their honeymoon in Bermuda and came back happy and tan. But when Mame became chair of the Junior Assembly, which ran all the big social events in town, she left Almighty Lou's name off every invitation list. The Feud was on.

"I'll show Mame who runs this town," Almighty said, her fist clenched in rage. And she plotted her next act of revenge.

By the way, there is no God. I have proof! But I'm saving it for the right moment.

Dudette, where did you hear this? Did Almighty tell you or are you making it up?

I'm not making it up. I pieced it together from stories I've heard over the years. I did research too. A lot of this was covered in the newspaper.

I can't decide if it's embarrassing or not.

It doesn't matter if it's embarrassing. It's the TRUTH.

There are no truths, only moments of clarity passing for answers.--Montaigne

Damnnn.i hated mamie when we were in school.

So i'm reading the book now and i'm trying to figure out of this is a true story or not. I love the book though.

Of course it's true! Truth is my middle name! (Actually it's Dorsey, but I'm legally changing it to Truth as soon as I get the chance...)

Omg this can't be real love the blog aaah

Wow Almighty can hold a bit of a grudge no?